For a long time the Nigerian Students’ Union of Ternopil National Medical University and the Nigerian Students Union of Ivano Frankivsk have been cooperating closely at the level of leaders of both public associations, and also always maintain strong relations between all members of the fellowship. From time to time they visit both cities and organize joint events.

Thanks to this close cooperation, a unique event was held – footballl competitions between the teams of Ternopil and Ivano-Frankivsk.

The first game was at the sports complex at 50 Bilohirska Street on Sunday the 27th of June at 4 pm. The Ivano team were on time and geared up for the meeting with their team bus. There were a lot of emotions and “hot” game moments during the match. On this day, the competition ended with a score of 2-0 in favour of the Ternopil Berkut (Golden Eagle) team.

Subsequently, the Students Union of Nigeria of Ternopil National Medical University and the National Union of Ghana of Ternopil Students organized a joint match in honour of this year’s graduates, which took place on the same field.

There were many fans as many students wanted to watch a match between two strong football teams on the African continent. The players represented two countries: Ghana and Nigeria. Each member of the team tried his best to make these competitions at a high level and give the audience unforgettable emotions. The result of the match was a draw – 1 : 1.

The graduates expressed their gratitude to the organizers of football competitions for the opportunity to enter the playing field for the last time, to keep vivid memories in their hearts and feel part of a large student family. 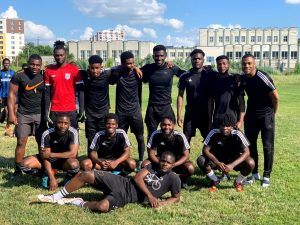