For several years now Ternopil State Medical University has been involved in the citywide International Day of University Sport, aimed at promoting healthy lifestyle and popularizing different sports activities among young people. On 20 September, in TSMU’s Athletics Hall students and instructors from Department of Physical Rehabilitation, Human Health and Physical Education took part in a flash mob, during which they performed a series of physical workouts, including floor push-calisthenics and balance exercises.

International Day of University Sport is a worldwide special event taking place each year on September 20th. It was initiated by International University Sports Federation (FISU), which proposed to UNESCO to internationally recognize a day dedicated to university sport. The proposal was endorsed by UNESCO’s Member States at the 38th session of the General Conference in Paris in November 2015. In Ukraine, universities organize a series of athletics events to mark this date. 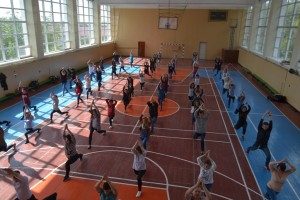