Association of Indian students of Ternopil State Medical University has introduced initiated a sports and  friendship festival, which aims to strengthen the friendly relations between Ukrainian youth and students from other countries studying in Ternopil. Event’s program include 100 and 400 meters race, relay races and team sports – football, volleyball, badminton, and cricket.

Ukrainian students were invited to take part along  with s tudents from a number of international groups, in particular  Associations of Nigerian, Polish, Egyptian, Iraqi and Pakistani students, as well as associations of students from Ghana, Namibia, Morocco, and Congo. In total, 10 international teams compete for the festival grand. The athletes’ health and wellbeing is being monitored by our students – members of the “Red Cross” volunteer squad.

Since the event took place on the eve of one of the most important dates in the history of our city – the first written mention of Ternopil and its official founding (15 April 1540), it was dedicated to this event, allowing each student feel being a part of the history of Ternopil.

The competition events started on 1-2 April 2017. Within a week, on 8 April, the first award ceremonies took place.

Badminton and volleyball competitions took place at TSMU athletic complex, while races were held on the central stadium. The best teams and best runners in each race were determined over two weekends. First place in badminton took, among men, a student from Pakistan Yaqoob Ali and women a student from Poland Wiktoria Karolina. Polish teams won in the men’s and women’s volleyball. A Nigerian team- Atteh Mercy Omolayo, Amina Ummi Mohammed, Igwe Etomchi Chimdi, and Oriaifo Ebosetale Edewede – won women’s relay; while in men’s relay first place took the students from Ghana Kennet Anoff Koranteng, Awnah Baffour Shadrack, Addo Solomon Appeakorang, and Richard Nsiah. The fastest in 400 meters men’s race was a student from Poland Mihal Lenart, and 100 meters race won Indian student Parth Sabya Sachi. Both of these races among women won students from Nigeria, respectively  Oriaifo Ebosetale Edewede and Igwe Etomchi Chimdi. Dean of International Students’ faculty, Professor Petro Selskyi and Cultural Affairs officer, Olena Pocryshko presented the students with participation diplomas, medals and trophies on  April 8, 2017. The winners in football and cricket will be determined during Easter weekend. These competitions will take place on the grounds of  school №29.

“I would like congratulate all the sports festival participants that demonstrated their sporting spirit during this event. I am also sincerely grateful to volunteers, administration and Academic Office of the University, TSMU Department of Physical Rehabilitation and all others who helped to organize SPORTS FEST 2017. I am sure that everyone had good time, found and new friends and and tested one’s  strength, endurance and sportsmanship, “- said the president of the Association of Indian students Arshbeer Sandhu.

Ternopil State Medical University Administration and the Association of Indian students would like to thank Ternopil Deputy Mayor Leonid Bytsiura for his assistance in organizing this event. 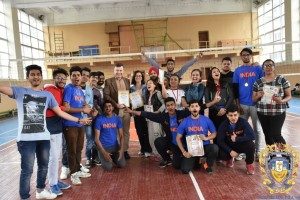