The men’s volleyball team of Ternopil State Medical University on March 26-28, 2018took part in the II Open Ternopil University Games. The competition was organized by the Department for Family, Youth Policy and Sports of Ternopil City Council and the Ternopil Regional Committee on Physical Education and Sport of the Ministry of Education and Science of Ukraine. Six teams competed in the volleyball tournament: TNPU -1, TNPU-2, TNEU -1, TNEU-2, TSMU,  and TNTU.

In the group tournament, our volleyball team played against TNEU-1 and TNPU-1. Our team bested TNEU, however they lost to TNPU, taking second group place. As a result, TSMU competed for the third place with the team TNPU-2, which placed 2nd in their group. The third place game was intense tense. Students of Ternopil State Medical University won 2 – 1.

Their coach Oleksandr Belousko said:  “The players had followed the instructions and advise I gave them during the break, and as a result they reversed the course of the game and won the second party, and then the decisive third. Their overall third place was well deserved. Other teams coaches shared with me that this year our team has become a real discovery and worthy competitor among other universities of our region. The winner of this year’s competition was the TNPU-1 team, which bested their perennial rivals TNEU in a spectacular match. I want to once again thank the players of our team for the determination and courage they have demonstrated in the arena and for believing in themselves first and foremost”.

The team withes to thank the university administration for their support, and also to the women’s volleyball team, who come to cheer all matches of the men’s team, and who took the third place in their University Games tournament. 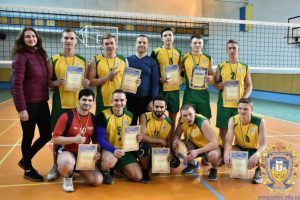